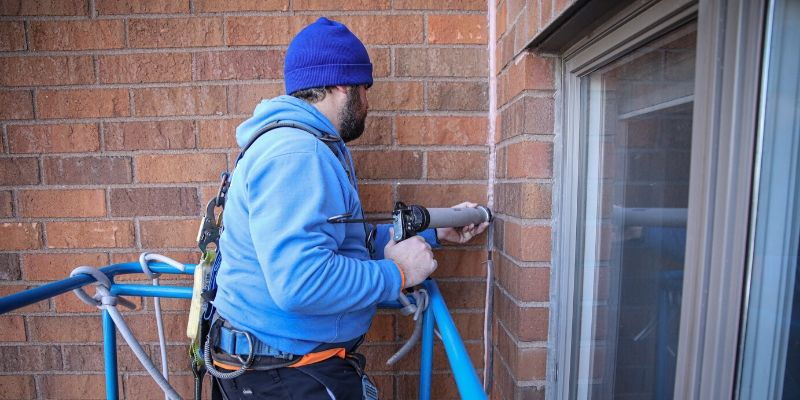 In late 2019, Squeegee Squad Minneapolis – St Paul was awarded a rather substantial caulking job at the Winslow House in Minneapolis. The Winslow House situated on the East bank of Saint Anthony Falls was built in 1857. It was one of the very first developments established during the time where the City of Minneapolis was redeveloping the Mississippi waterfront. Originally, it was designed as a hotel, but in recent years it has been transformed into a 58 unit condo building overlooking the beautiful city of Minneapolis. Just take a look at that breathtaking view!

Our Squeegee Squad Minneapolis – St. Paul Safety Manager Steve Crank led the caulking project during each phase. As always, Steve led with professionalism, making sure that the commercial building restoration was done right the first time and completed in a safe manner. Along with ensuring the safety of our team and making sure the job was done correctly, Steve maintained excellent communication with our customer informing them of the team’s progress all along the way. The residents and employees of the Winslow House got to know our Squeegee Squad Minneapolis – St Paul crew pretty well over the course of the caulking project which in-turn built valued, professional relationships for years to come.

Each day, the Squeegee Squad Minneapolis – St. Paul crew would arrive on the job site ready to battle all sorts of elements; everything from the sizzling September sun to the frigid freezing temps of February. In the fall, the crew started out by rappelling; re-caulking all of the window to building joints as well as the expansion joints. As the weeks went on, the team continued the work in the 85 foot lift. This caulking project was about half chair work and half boom lift work. Additionally, there was also a bit of ladder work to be done around the balcony areas of the building.

We look forward to many more  projects like this to come! Contact us today and we can provide an estimate for your Minneapolis / St. Paul commercial building restoration needs