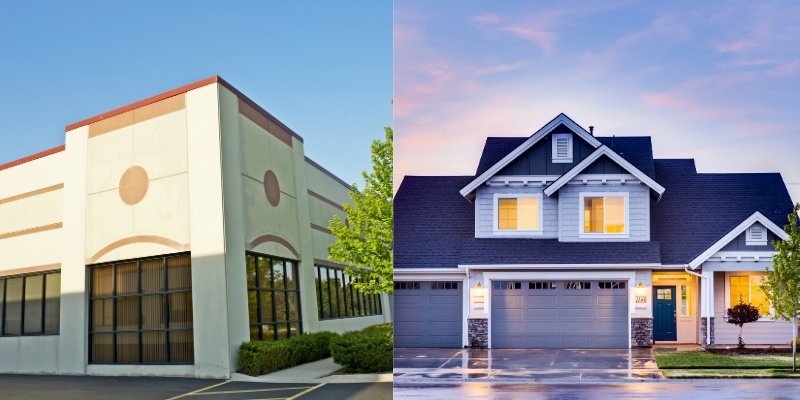 A good roof, in general, keeps you dry and protected from the elements. However, a great roof uses materials and a slope appropriate for the purpose of the building. It may seem like different types of buildings require different roofs, but it’s not that simple.

The Main Differences Between a Commercial Roof and a Residential Roof

Commercial roofs are more likely (emphasis on that phrase) to have flat or very low-sloped roofs. This allows equipment like air conditioning compressor units to sit on the roof, away from people in the building and away from cars in the parking lot. These roofs are easy to walk on when roof maintenance is necessary. Residential roofs tend to have more of a slope, and you may see more shingles used as opposed to the membrane-style roofing used in flat commercial roofs.

It gets a bit more confusing from there, however. Large apartment buildings often have flat roofs that look like commercial roofs, and it’s not unusual to find multi-unit dwellings of a certain size lumped in with commercial buildings in city or state building codes. Metal roofs are standard on commercial buildings but are also becoming common on residential buildings because of the material’s durability. And some residential styles use flat or low-slope roofs (such as many Spanish-style bungalows in the United States, which have either partially flat or fully flat roofs), too. You’ll also see businesses run out of houses that have been converted into commercial properties. These houses usually have residential-style roofs because that’s their style.

Even skyscrapers and high-rises aren’t immune; you won’t see peaked shingle roofs on a commercial skyscraper as those roofs need to be flat for equipment and building maintenance, as mentioned (it would be highly dangerous and, really, impossible to replace a peaked roof on a skyscraper because that would require workers hanging off the sides of the skyscraper while handling heavy materials; no, those roofs need to be flat). But residential high-rises would also have to have flat roofs for similar reasons.

At this point, you could sum up the main differences in materials as whatever is appropriate for the slope of the roof as defined by the building’s design, whatever safety dictates, and whatever the city or state building code requires. That’s a frustrating summary but one that allows for the variations you’ll see in roofing.

Maintenance usually consists of regular inspections by companies that know how to check out a roof without damaging it (walking on roofs increases the risk of creating damage, believe it or not). Roofs should also be inspected after events that could damage, including hail, tree branches falling onto the roofs, other weather phenomena, quakes, and finding unauthorized people on the roof. Those people may have walked so heavily that they caused tiny cracks to open up in the roofing material.

Some materials are less prone to damage than others. This is why a metal roof is so popular now, as it’s harder to damage, although it’s not invincible.

One maintenance task that people often forget about is roof cleaning. They’ll clean gutters and windows but forget about the roof, too. The slope doesn’t matter; even steeply sloped roofs can accumulate dirt and have algae form on tiles. Cleaning can involve gentler methods like sweeping, but many companies use low-pressure washing to remove dirt. Too high of pressure can damage many roofing materials, so this is not a DIY job. If you want your roof washed, you need to hire a company with highly trained staff who know how to find that sweet spot in terms of water pressure to get the roof clean without further affecting the material.

Commercial and residential roof materials are getting better and tougher, but they still need care. Whether you’re a manager of an apartment complex, own your own home, or handle maintenance for a commercial building, have the roof cleaned once in a while to keep the building looking terrific and ensure debris isn’t hiding new damage that you can have repaired.