To be the best window cleaning organization in the world.

We appreciate your confidence and strive to earn your loyalty. We stand behind our workmanship. If you see a mistake in our cleaning, we will happily come back and fix it. We strive to maintain the highest quality service at the best possible price. Your satisfaction is our goal. Please contact us if you have comments or suggestions about our service. The highest compliment we are paid is the referral of your friends. Thank you! 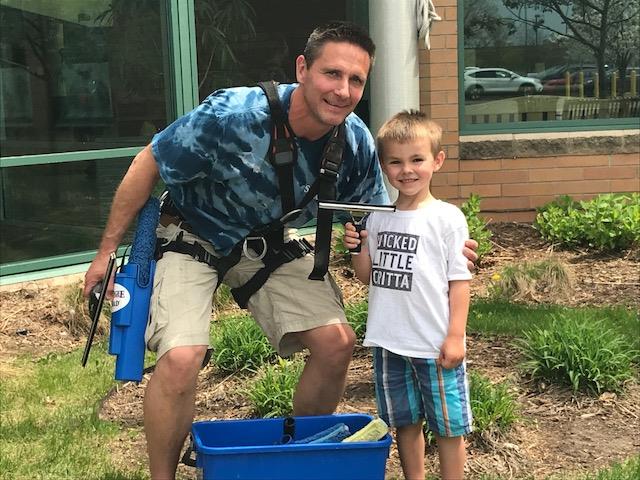 If in 1994, you were to tell Jack Ruegsegger that in ten years, he would have a successful business cleaning windows, he would have probably told you that you were nuts. You see, back in 1994, Jack was just beginning college as a biology major with hopes of following his father’s footsteps and becoming a physician. As is often the case, the path we set out on isn’t always the one that delivers us to our calling. For Jack, it was this unexpected journey into the world of window washing that made all the difference.

After finishing college, Jack found that his plan of becoming a physician was not meant to be and began working as a stockbroker in training. Finding that this was a tough row to hoe, Jack began washing windows on the weekend to supplement his income. Cleaning windows was proving to be more rewarding than trading stocks for a living, so Jack quit his job and dedicated himself fully to the service of washing windows.

At the same time, Joe was pursuing a college degree in business. So, between classes and studying, Joe became Jack’s partner. The matter of naming the company proved to be a predetermined task: Jack & Joe’s Window Cleaning, Inc. was the obvious choice!

In 2002, after graduating from college, Joe directed his efforts entirely on the goal of servicing the growing client base. With Joe’s assistance, the business grew rapidly. Jack and Joe began looking at different ways to grow the business and help smooth the seasonality of window washing in Minnesota. As a result, snow-plowing, gutter cleaning, pressure washing, and servicing the window cleaning needs of local builders became part of the package. Jack and Joe’s Window Cleaning was growing into something that was well beyond Jack’s dreams in 1999. By this time, Jack & Joe’s Window Cleaning was reaching neighborhoods throughout the entire Twin Cities metro area.

As Jack and Joe continued to nurture, grow, and expand their window washing business, they decided to change the name to meet increasing interest, support expansion, and develop a national brand. What had begun as Jack & Joe’s Window Cleaning became Squeegee Squad.

As pioneers in the window cleaning business, Squeegee Squad had played an integral role in offering professional window cleaning services beyond the Twin Cities metro area. After building a strong reputation over the years, Jack & Joe’s Franchising, Inc. now enlists the help of franchise partners to expand on this success, while maintaining the strong reputation for which Squeegee Squad is well known and trusted.

If you want to bring Squeegee Squad to your market, please read about our window cleaning franchising opportunities!