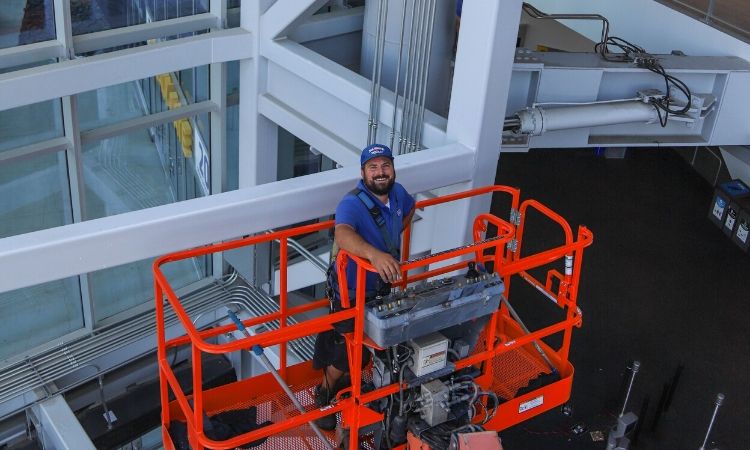 You’ve seen the zany scenes many times before in classic comedies ranging from those of Laurel and Hardy to Abbott and Costello: the careless and clumsy window cleaners working high on wobbly platforms nearly losing their lives in risky, though hilarious, maneuvers.

The reality of high rise window cleaning is quite different from the pratfalls of the silver screen…fortunately. At Squeegee Squad, our professional window cleaners have undertaken thousands of assignments on skyscrapers without ever suffering a fatality or serious injury.

That said, window cleaning in skyscrapers can be a high-risk occupation. Though deaths and even close calls are rare in America, they draw headlines when they do happen.

In the 1930s, it was said that one of every 200 window cleaners lost his life annually in New York City alone. Fortunately, times have changed, but the risk is still there. In 2014, The International Window Cleaning Association released figures that “only” one fatality a year had occurred among U.S. high rise window cleaners over the previous four years.

Despite the relative safety of the occupation, the accidents and near accidents catch our attention because of the palm-sweating details.

In November 2014, window cleaner Pedro Perez fell eleven stories from a window-washing platform. He landed on a moving vehicle on the street below and suffered extensive injuries, but miraculously survived. He had disconnected the lanyard to his safety harness to get a hard-to-reach area and lost his balance. His company was fined by the Occupational Safety and Health Administration (OSHA) for safety equipment violations.

Another near-miss that garnered significant national attention was when two window cleaners got stranded 69 stories up the face of the new World Trade Center in the same month and year as the incident described above.

Juan Lopez and Juan Lozama were left stranded on a dangling scaffold after a cable broke. The scaffold hung at a nearly vertical angle, with the two clinging to it for about an hour and a half. They were both harnessed to the roof of the building, but otherwise helpless until members of the New York City Police Department’s elite Emergency Services Unit and other rescuers were able to drill a hole in a thick window and pull them to safety, uninjured.

In 2007, only one of a pair of brothers was so lucky. Edgar and Alcides Moreno were about to start a cleaning job on the 47th floor of a New York City skyscraper. They hadn’t even attached their harnesses when cables on their platform failed. It was later proven that the equipment had been improperly installed.

Younger brother Edgar died instantly, but Alcides survived the 47 floor fall. He was seriously injured and required 24 pints of blood, but he achieved about an 80 percent recovery over time. One theory for his survival was that he might have stayed with the scaffolding so that the equipment took most of the impact and perhaps even slowed the speed of the fall somewhat through aerodynamics.

These and other terrifying incidents highlight the critical importance of having — and using — all the latest innovations in safety equipment and procedures. At Squeegee Squad, our professional window cleaners are highly trained and equipped and adhere to all OSHA safety standards of the window cleaning industry.

Your Squeegee Squad team can safely confront every high-rise challenge, with training in rope access and by being equipped with cutting-edge aerial lifts, powered platforms, ladders and water-fed poles — whatever they need to address the unique challenges of your building